Om, let us meditate on the reflection of water
O person of ocean blue, give me higher intellect
And let the God of water illuminate my mind

Jal is the nectar of life. Water is the original creator.  Sprinkle just a few drops of cool water on the parched earth and see how life germinates there without any external help. “Jal” symbolizes boundless energy of an original idea, which can be ruthless amidst the winds of chaos.

Jal constitutes the phenomenal energy contained by the clouds, swaying to the rhythmic vayu. The clouds personifying the dark soldiers straddling horizons, obscuring the mighty sun and then showering life all over “Prithvi” (the Earth).

Such is the power of that one thought or “winning idea” that circumvents thousands of hurdles and prevails.

Saraswati, the great river, awakens us to knowledge by the perception and shines in all our thoughts. Saraswti, the inspiration is full of her luminous plenitudes, rich in substance of thought. She upholds the sacrifice, the offering of the mortal being’s activities to the divine by awakening his consciousness so that the right states of emotion occur.

The Jal in the river has the patience of eons, of “Kalpas” because it inherently represents the truth of an honest idea which has the unfathomable patience and energy to defeat all falsehoods obstructing its way.

Jal is also the eternal calm ocean. Deep, silent and cool on the surface, hiding, like the mind of a meditative sage, thousands of storms within. The ocean is the human consciousness and is often compared to the mind, the thoughts and emotions being the waves. 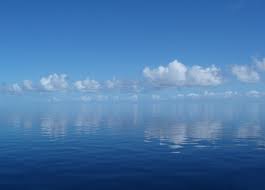 The Churning of the Ocean is allegorical, symbolising the great fight in the human bosom between Virtue and Vice. The forces of Virtue, the celestials, the devas fight the forces of Vice, the demons, the asuras. In this fight Immortality is the end result and Immortality is nothing but Self Actualisation !

“Shantah Prithvi” – calm and serene despite raging storms. From time immemorial, man has been drilling holes all over its vast expanse, has been yanking out its entrails, yet it remains silent, never complaining. Waterfalls fall, rivers traverse cutting across its flesh, yet she remains forgiving and kind. She didn’t even cry when Hiroshima & Nagasaki burnt, absorbing all the pain and shock, giving back life and happiness again and again.

Love for mother comes naturally to a child, perhaps developing in the womb itself. Although we try to repay it through different means, the indebtedness towards mother remains life long. And if we extend this analogy to Earth and Nature, which provide human beings with life sustaining elements, we have quite utterly failed to express gratitude in any way.

Stable and consistent: Prithvi, ever committed to its mission. For ages, it is going around the sun at its appointed path, never failing and not wavering focussed as ever.

All embracing, it is Home to everyone and everything. The crawling little insect and the huge dinosaur, all find a place on this benevolent earth. Food for everyone, water for the thirsty, gold for the greedy. Close your eyes and think of those twinkling stars, if they ever fall, where do you think they would go. Such is the attraction of “Prithvi”, the scientists so dismissively call it the gravitational pull.

Yet hark the whining bird, hear the silent wailings of the earth. Beware the volcanoes raging within its crust may burst any moment. Nurse its wounds and slow down the devastation, because home is where Prithvi is.

In addition to the above summary I’d like to add a drop of mythology that might shed some further light on this manifestation of Devi:

The Earth Goddess, Bhoodevi, nourished all humankind with Her bounty, She was venerated by sages and seers; She belonged to all. But then humans sought to possess Her and plunder Her wealth. Enraged by this callous new attitude toward Her, the goddess refused to let any seeds sprout or any plants bear fruit.

Humanity began to starve and die away. Moved by their plight, the god Vishnu descended to Earth as the patriarch Prithu and tried to make peace with Bhoodevi. But she refused to forgive humankind; She ran away from Prithu in the form of a cow. Prithu decided to take a harsher approach, pursuing Her on his chariot and threatening to shoot Her with arrows.

“I do not wish to harm You,” he replied. “I want You to feed mankind.”

“Why should I nurture those who do not respect me?” She asked.

“Fear not,” he told Her. “I shall make sure humans respect their Mother Earth and treat Her as a cow treats Her calves. I will be Gopala, the cowherd, protecting You from danger.” And so it came to pass, Prithu instituted the practice of prudent economics and taught mankind to draw on the Earth’s resources without exploiting Her. He also established the sacred laws of dharma that ensure stability in society, and maintain a harmonious relationship between mankind and the world around.

Pleased with this, Bhoodevi called Herself Prithvi, beloved of Prithu.

But the lesson remains, and may yet return to destroy humankind — as exploitation replaces respect, will She continue to nurture us and give us life?

Some questions provoke the innocent mind, since the beginning of time. A child may ask some questions which are related to the curiosity of the adult as well like why the stars twinkle, why the moon shines, why the sun rises, why the night comes, where do we come from, where do we go, etc. Mankind has always been struggling with these problems. To resolve this curiosity, they had to increase their intellectual powers. Philosophy and science are the result of this intellectual process. The subjects, which cannot be handled in the laboratory, can be understood by means of the imagination.

The entire universe/space is called Prakriti and manifests by a vibration of the Svara, a current of a life-force or a superstring called the Parabrahman and the Purush. This in turns causes the subtle elements of the 5 ethers, or strings (the quality of ether is called sound) to vibrate, the distinct vibration causes the Pancha-Mahabhutas, the five physical elements.

Previously we have touched upon the agni, vayu, prithvi & jal. The word akasha is made up of a+kashate (verb), which means ‘that which shines completely’ and makes others shine as well. In Latin, space means ‘spatium,’ which means ‘to lie upon.’ In Chinese Buddhism, ‘agha‘ which comes from Sanskrit, means both visible matter and invisible emptiness. (cf. Y. Raguin, Terminologie). In Chinese stories also, there is discussion about jala, vayu and akasha. Akasha means sky, the space, the one without the body, it is the stuff of which Gods & celestial beings are made of. All other elements get affected when they come in contact with each other but Akash is the purest of them all.

I believe above the earth engulfing humanity, there is the kal (time) and then there is the akasha. So the akasha is the place of space and time. Space and time together are a unit because in space we can go back, but not in time. When time and space pass through us, they look different, but they are connected to each other. Space and time make way for endless possibilities; possibilities the human mind does not even fathom, exist. Akasha has several qualities of the infinite human mind – it is mysterious, boundless & infinite beyond the comprehension of logic. So go ahead and unleash all that you hold in you, for life teaches that constraints are only in the mind and even though we live one life, it does have endless possibilities!